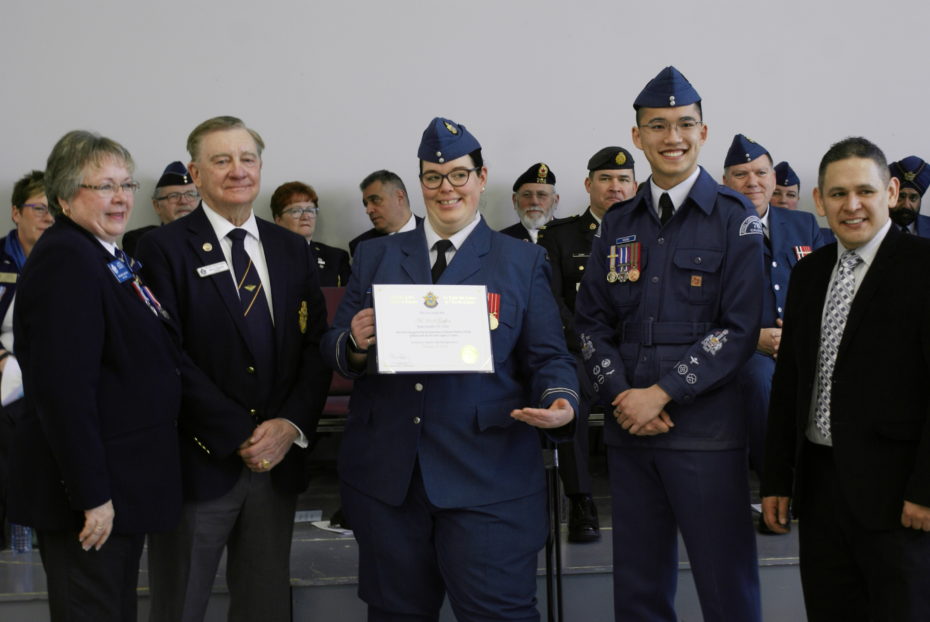 After inspecting the Cadets, LCol Letellier said, this is a proud day to stand up a new Royal Canadian Air Cadet Squadron in Canada and you should all be proud of your accomplishments today.  He also acknowledged the Officers, parents and the Air Cadet League for working together towards the success of this squadron.  LCol Letellier also presented the Squadron banner to the Commanding Officer, Erica Angel who then passed it to Mr. Martin Ponciano, SSC Chairman, who then passed it to WOI Wong who presented it to the Flag Party.  The banner was then marched through all of the ranks to celebrate the official Stand Up of 918 Griffon Royal Canadian Air Cadet squadron.

Chief Warrant Officer First Class WOI Dylion Wong, masterfully commanded the parade square of 90 Cadets on parade.   The Cadets on parade were able to demonstrate how hard they have worked on their drill and deportment to make this Charter Parade so successful. The squadron band played very well to compliment the ceremony and parade.

Mr. Merv Orzirny, National Air Cadet League President, addressed those assembled and related a true story about why we are involved supporting Air Cadets.  The story was of a young man choosing to join the Civil Air Patrol in the USA, rather than continue down a dark path.  The Civil Air Patrol is a similar program to our Canadian Air Cadets. That young man grew up to accomplish so much in the USA Air Force and had a very successful career.  Of his former gang, six died violent deaths and four are incarcerated in prison. He is the only one living of his former gang who gained much success and has accomplished so much because he chose to join the cadet program.

The Royal Canadian Air Cadets, in partnership with the Air Cadet League of Canada has been training youth in Canada for over 76 years.  The Cadets are the largest government funded youth program in Canada with over 52,860 cadets across Canada, and of that total, over 26,254 are Air Cadets in 461 Squadrons.  The Royal Canadian Air Cadets accepts youth between the ages of 12-18 who have a desire to learn more about the air element of the Canadian Forces, wish to develop the attributes of leadership and good citizenship and who wish to promote physical fitness.  Air Cadet uniforms are supplied free of charge.  While the program is military based, there is no obligation for a cadet to join the Canadian Armed Forces when he or she finishes their cadet career.  Cadets are also encouraged to learn more about opportunities within Canada’s aviation industry.